Â On a quiet Saturday morning in Arroyo Grande, California, our two year old filliesÂ Gaysha,Â Galaxie, andÂ GeorgiaÂ calmly waitedÂ for the blacksmith in the barn at Rancho Arroyo Grande.Â  Then – for reasons known only to Gaysha, she startled, panicked, and pulled back so hard on her halter that she came out of it and flipped over backwards landing with a thud on her back.Â Â Jackie Brittain, Merriewoldâ€™s manager and trainer, ran to her side as Gaysha got up, shaking and scared.Â  Jackie soothed her,Â calmed her, got her back in her halter and looked her over for any injuries.Â  All appeared to be OK.Â  It was just some kind of freak accident.Â  Gaysha was not a high-strung filly.Â  She had always been easy to handle, good natured, and sensible.Â For several days after the accident, Gaysha remained out in the pasture with Georgia and Galaxie.Â  However,Â it soon became apparent that her hind end was uncomfortableÂ and not getting any better.Â  So, we brought her in for stall rest and did some energy balancing work on her.Â  Then one morning,Â about a week later,Â she laid down and either couldnâ€™t – or wouldnâ€™t, get back up.Â We now feared that Gayshaâ€™s injuries were probably a lot worse then we had previously thought.Â  We called Alamo Pintado Equine Medical Center and talked to Dr. Carter Judy.Â  We discussed our options and decided to get her up and bring her in to the clinic.Â  Lucky for us that day, Cody – the manager of the stable, had a few friends over to do some roping.Â  It took six of us to get Gaysha up.Â  She was in pain and afraid to stand on her right hind leg.Â  We knew it was risky getting her in the trailer and taking her to the clinic, but our other options were even worse.Â  Once up, Gaysha hobbled slowly to the trailer and courageously walked on.Â 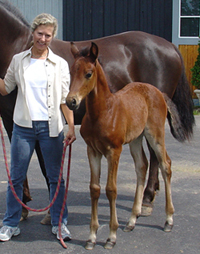 We arrived at the clinic and Gaysha was escorted to the examination area.Â  Dr. Judy gently swayed her hind end and knew immediately that she had a fracture.Â  Jackie and I both had a chance to feel the slight clicking during the movement.Â  To determine the severity of the injury he wanted to do a nuclear sintigraphy test.Â  We left Gaysha there in good hands – not knowing, what the future would hold.Dr Judy called that evening and confirmed the worst.Â  Gaysha had a fractured femur and a probable additional fracture of the pelvis on her right side. He cautioned us that although there was hope of recovery the road would be long with possible set-backs and not to be too optimistic.Â  He prescribed maximum confinement, pain management and bone building supplements.Â  She could go home, but only time could helpÂ with theÂ healing.The incredible team at Rancho Arroyo Grande went right to work preparing a special stall for Gaysha.Â  They installed an overhead steal cable diagonally across her stall going from hay to water.Â  Her lead rope was tied to the cable and slid along so that she could eat and drink, but could not lie down.Â  Extra bedding was added to cushion her feet.Â Â Â A dirt ramp was fashioned so that she would not have to hop over the threshold (although she would not be leaving this stall for a long while).Â  Gaysha needed to stay calm and quiet.Â  Our fear was that she would keep trying to lay down and consequentlyÂ re-injure the fractures. 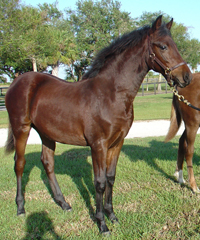 The first and second week went by with Gaysha being the model patient.Â  We took turns going in to her stall to give her light grooming,Â massages and to just spend time with her.Â  She would look out her window quietly and occasionally called to her friends.Â  By the third week, though, she seemed restless – or perhaps, depressed.Â Â It wasÂ almost as if she was giving up.

That weekend, when Jackie went to the barn for the morning check, she found Gaysha trying to lay down -Â while still hanging from the lead rope.Â  Jackie released the rope, then Gaysha laid down and went into a deep sleep.Â  Jackie waited while Gaysha slept wondering how she would get her up.Â  It was Sunday and there was no one else around. Â After about an hour, Gaysha woke up.Â  With some help and coaxing was able to stand. Â Jackie re-tied her lead rope to the overhead cable.

The next few weeks went much the same.Â  Over the weekend, when the barn was very quiet, Gaysha would try to lie down.Â  We would release the lead, she would sleep and then with help, we would get her up.Â  We all hoped that she was not hurting her self, when she was down, but basically there was no way to stop her.Â  Gaysha seemed to be slowly mending, but for the people who loved and cared for her – it was sad to see this once vivacious and animated filly looking so despondent and lonely.

The six week mark was upon us and status quo had set in.Â  Then, while massaging Gaysha one morning, I noticed she was standing on her right rear leg (the injured side) holding up her left.Â Â  There was no heat or pulse in the left foot, so maybe, she was just resting on the injured leg?Â  To make sure, we called a local vet who came and took an X-ray of the left hind foot. Â Gaysha had developed a type of laminitis called â€œstress founderâ€œ. Â Caused by the weeks of increased pressure from standing mostly on the left rear foot.Â  It was so advanced that her bone was close to protruding from the bottom of her foot.Â  One call to Dr. Judy and we were on our way back to the Alamo Pintado Clinic.Â 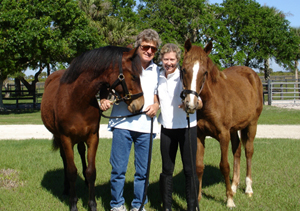 He told us that laminitis can happen in a small percentage of fracture cases, but there is no way to predict or avoid it.Â  Now that her fractures had had some time to heal, the founder was Gayshaâ€™s immediate and critical challenge.Â  Dr. Judy recommended that she stay at the clinic, where he and the farrier, could fashion a special shoe to take the pressure off the foot and he could keep an eye on her.Â  For the second time, we were cautioned that because of the severity of the rotation of the bone, Gaysha might not make it.

Jackie and I left the clinic without Gaysha.Â  Our hopes and expectations were low. Â Why, after such a courageous recuperation from the fractures, should she have to go through another agonizing ordeal?Â  It wasnâ€™t fair and I was mad!Â  Mad at Gayshaâ€¦mad at myselfâ€¦mad at the world.

Gaysha spent the next seven weeks at the Hospital.Â  During that time. a good friend Susan Drake visited her almost every day.Â Â  She gave her gentle massage and clay treatments to extract heat and release tight muscles.Â Â  She also didÂ energy work to stimulate hoof growth.Â  After only two weeks at the clinic, Dr. Judy was amazed and encouraged at the amount of growth in her foot.Â Â  So much so, that we started to discuss her next level of care.Â  He recommended that Gaysha go to a rehabilitation facility close to the clinic so that he and the farrier could continue their care and observation.

Soâ€¦almost two months after her critical founder and three and a half months after the fractures, we transported Gaysha to High Sky Farm -Â a calm sanctuary for horses needing to recuperate from injuries.Â  For the first time since the beginning of this ordeal, Jackie and I had hope that Gaysha would make it. 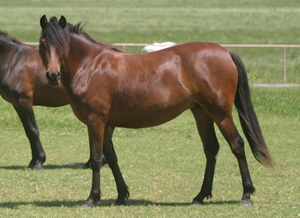 After only one month at High Sky, Gaysha started coming back to life.Â  The twinkle was back in her eye, the dapple and shine in her coat returned -Â and best of all, her inquisitive out-going nature was rejuvenated.Â  After the first few weeks, she graduated to a small paddock with hand walking and grazing.Â  After another month, she started exercising in the walker. Â Five months after her injury, she was well on her way to recoveryÂ and we startedÂ planning her home-coming. Â Our hopes were high and best of all Gaysha had returned to her former self.Â  Not only physically, but also her bright happy attitude.Â  I started looking forward to the moment when she wouldÂ be reunited with her friends and could become a real horse again.

Merriewold Gaysha returned home two weeks ago.Â  She has a nice outside run and a small grass paddock.Â  We are exercising her everyday and she exudes a calm maturity.Â  It is too soon to know if she will recover fully from the fractures and laminitis.Â  Â For now, we are happy and satisfied that she is not in pain, looks great, and is on the road to recovery.

If in the future she could be a brood mareâ€¦it would be a reward.Â  Â If she could do some trail ridingâ€¦it would be a dream come true.Â Â  And if she was able to take me into the show ring, it would be an incredible miracle. Â Only time will tell.Â  Â We will keep you posted.

PS: During this whole ordeal, we had followed the progress of Barbaro, the Thoroughbred racehorse, with great interest and empathy.Â  Barbaroâ€™s injury was on May 20th – only five days before Gayshaâ€™s fall.Â Although his injuries were many times worse than Gayshaâ€™s, they had been on a similar path of recovery.We were saddened to learn of his passing and wish all those in charge of his legacyÂ our very best. 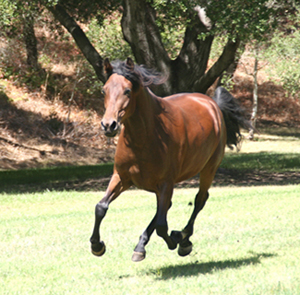 Â It has been a little over a year since Gaysha’s fall and as you can see from the pictureÂ above, she is back to her old self!Â  She and Caduceus Marika share a pasture and have become best friends.Â  In this photo, Gaysha is racing to re-join Marika without any concern for her old injury.

Gaysha is now four and in training.Â  Jackie has just started riding her and says that Gaysha is relaxed and attentive and seems to have completely forgotten about her injury.Â  We are so proud of her and her progress! 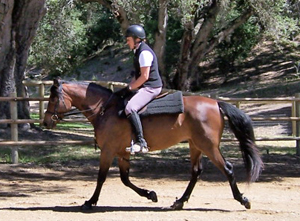 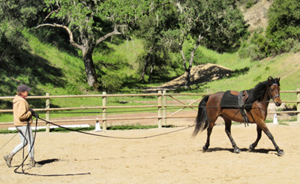