Our wonderful mare ‘Reef’ – dam of Rocket, Honey and Hanah, passed away Â July 17, 2007 from an acute case of colic.Â  She was a big, easy-going mare and we will miss her.Â  This is our tribute.

Reef, was born July 31, 1989 and became a part of our program after the purchase of her son WNC Rocket Man.Â  We were so impressed with Rocket’s abilities that we had to have his Mom as well.Â  Reef passes on her size, athletic conformation and steady disposition to her foals.

Her foals are smart, tractable, tall and are able to compete in the larger ‘open’ multi-breed market.Â Â Â BelowÂ areÂ some special comments by her previous owners and Diana Wold, Reef’s last owner.Â  Then aÂ list of Reef’s foals.Â  Diana had three of her lovely offspring, a gelding and two fillies…WNC Rocket Man, Merriewold Hanah and Merriewold Ima Honey Moon.

“Reef, was so very special to us.Â  She was our first broodmare, as well as, a companion and show horse.Â Â She produced several beautiful babies for us and her oldest was our first Grand National Top 10 horse.Â  She opened up a while new world to us, but even more, she was our special friend that greeted us each morning, gave kids pony rides, took care of all the babies, tookÂ Mike on his first saddle seat ride and shared the foaling of her babies exclusively with him.Â  She was the bestest of moms, teaching her babies all the right things and disciplining them as only a fantastic broodmare could do.Â  She taught them to love people, understand our requests and to tolerate whatever we asked of them.Â  She will be so missed, but her legacy lives on in her get!”

“Eleanor Brackman owned her first foal, Windcrest Legacy, until she passed away.Â  Sandy and Calvin Sessnick took “Legs” to Nationals a couple of years and she placed well in the hunter division.”

“The next foal was Rocket that, of course, you own.Â  Then came WNDC Compadre’s Reflection (x Holiday Compadre) owned by Rick Gaeckle and Shara Davis.Â  He is doing greatÂ (placed with his Junior owner at Nationals last year) and I will tell him.Â  He does hunt and western and just started dressage.”

“Next was WNDC Peace of the Action (x War and Peace).Â  We sold him as a yearling and they are using him for stud in Penn.Â  Next was WNDC Eclipses’s Reflection that we showed at Nationals with Calvin and Sandy as a yearling.Â  He placed in his futurity.Â  We showed him ourselves as a 3 year old in hunt and he was 8th in his world futurity and 3rd at OKC in stallions and geldings hunt.Â  We sold him to a lady in Utah last summer (I will contact her).”

“Then, WNDS Magnum Force, which is owned by Jennifer Carr.Â  She has shown her English Pleasure very successfully and now at 4 is changing her to hunt and she looks awesome…That is the list of foals.” 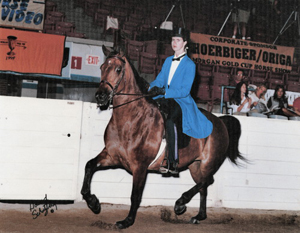 “I had the pleasure of knowing Reef for many years.Â  I was granted the distinct pleasure by Mike & Claudia Grimes of being allowed to show Reef several times.Â  She was a dream to ride, full of motion and power, so much fun.”

“In 2004 I was given the grand pleasure of purchasing one of her foals, WNDC Magnum Force, a tall chestnut yearling filly by Arboria Top Gun.Â  “Maggie” has so many traits of her mother and she and I have formed a great bond that is carrying us to the winners circle in the show ring many times over.Â  She is carrying on her mother’s legacy very well.”

“Reef will be greatly missed.Â  She truly was a special horse and touched the hearts of all who had the privledge of knowing her.Â  Until we meet again…”

Pictured left is JenniferÂ and Reef, during the show years. 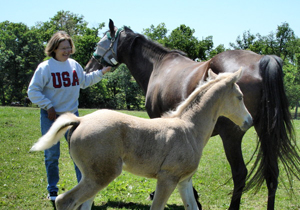 “Moonset’s Reflection, Reef, was a dear Morgan mare, a gentle soul.Â  She was a good mother and an athletic representative ofÂ the breed.Â Â  Her pasture mates and I will miss her.” Â  Sincerely, Sally Longenecker.

“I purchased Reef – sightÂ unseen, after getting to know her son, WNC Rocket Man (by Holiday Compadre).Â  Rocket is an exceptional sport horse and has the qualities we are looking for in our breeding program.Â  Reef went directly to liveÂ at Saralin in Kentucky, where she produced two foals for us, Merriewold Hanah (by Lyonhil Quasar) and Merriewold Ima Honey Moon (by MEMC Tequila Cuervo).Â  I know Reef mostly through these three individuals.Â  The traits they share are their tall athletic conformation, their smooth ground covering gates, a pretty head with large intelligent eyes and their inquisitive playful nature.Â  Loosing Reef in such anÂ unexpected way is a tragedy.”