Â The San Luis Obispo Tribune featured Merriewold and our green practices in their article,
“Greener Pastures at the Merriewold horse ranch in Huasna Valley” 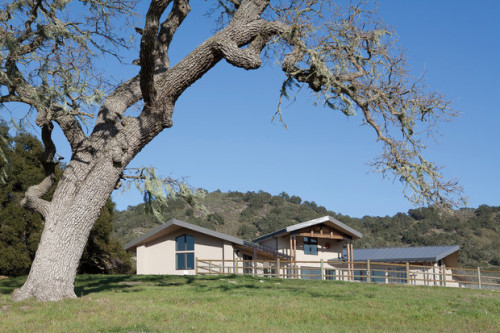 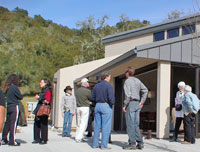 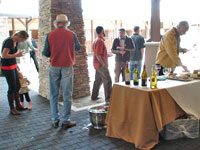 The property development was planned from underground to the tops of the roofs with environmentally sustainable horse and ranch management in mind.Â  This exciting and innovative concept was the focus of the day’s event.

Guests were first presented with a catered bounty of appetizers and wine.Â  Then they were given the opportunity to meet and greet duringÂ a short social time.

They were all fascinated by the eco-friendly concept and anxiously awaited for the tour to begin.Â  Many spoke of their own pro-active efforts and interests in reducing the environmental impact of ranching in general. 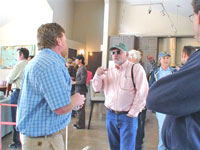 Their short wait was rewarded with an introduction to the architect (Tom Brajkovich), Project Manager (Paul Trent), sub-contractors and designers of the project by theÂ General Contractor, Frank Cullen.

FrankÂ explained how the 2 year project was managed as a collaborative team effortÂ to achieve the goal of creating this very unique ranch.

ThenÂ Tom Brajkovich followedÂ with a quick overview of his journey with Don & Diana, owners of Merriewold Morgans, beginning 3 years ago when they first came to him with their vision of building a Green Horse Property.

Tom was broughtÂ toÂ Huasna Valley and then they explained their concept of state-of-the-art facilities designed from the ground…up with sustainability in mind.

Structures were to include a Grooms quarters/shop/hay barn combo, the horse stables, run-in barns,Â round penÂ and pastures,Â a regulation size covered arena, a house for the Ranch Manager/Trainer, Jackie Brittain and the main residence for Don & Diana.

Frank then spoke briefly about some of the engineering that went into the re-use of water,Â environmentally safe materials, and other sustainable technologies and management practices.

He also touched on some of theÂ challenges of the landscape designer, Linda Shotwell toÂ follow the eco-friendly concept, but alsoÂ use native plants that would be draught tolerant,Â wildlife resistant and non-toxic to horses.

And finally he spoke of the sub-contractors, carpenter’s and interiorÂ designer, (Michele Fanning’s)Â role in the property development. 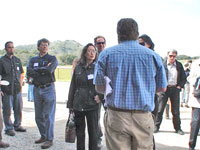 Then he directed the crowd to the first building on the tour and everyone enjoyed a leisurely stroll with wine glasses in hand toward the next gathering.

At each structure Frank gave a short overview of the processes and technologies specific to that building.

We will be postingÂ short video clips in the near future of Frank’s tour talks at the Green Horse PropertyÂ  website.

It was a California heat wave!Â  But that didn’t deter the sixty to seventy friends, neighbors and horse enthusiasts from joining us for the second Merriewold Morgans Open Barn Celebration.Â Â  The â€˜hot ticket’ of the day was definitely Deb Hirons and her beautiful Morgan mare, Alamar’s Touch of Magic, performing an FEI level Dressage Musical Freestyle.Â Â  There was also a full schedule of activities to entertain and educate our guests.

The fun started around 10 o’clock.Â  All the horses had been groomed and were ready to meet their guests.Â  The tents and lunch area were all set, artists Bj deCastro and Entera brought a beautiful display of equestrian paintings, and our â€˜Ranchita’ was dressed up and decorated for the party. 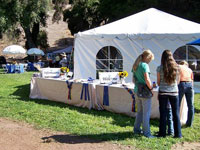 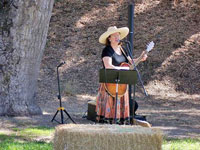 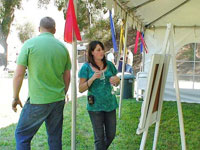 This year we had the country singer/guitar player, Patty Torrey serenading us under the ancient oak trees, and the food was prepared by “Mama’s Meat Ball”. Â Melanie Knowlton seamlessly managed the party so that everyone including the Merriewold team could have a wonderful time. 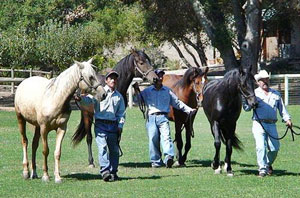 At about 11 o’clock, Jackie and I took our guests on a tour of the facility and introduced all the horses individually.Â  Many of the people who had come to our first open barn were looking forward to seeing how the babies had grown and they weren’t disappointed.

The first stop on the tour was the two year old pasture with Java, Josie, Jet Lee and Jolie.Â  We talked a little about Morgan blood lines and the â€˜ideal’ conformation for the Morgan breed.Â  We also pointed out the qualities and pedigree highlights of each horse. 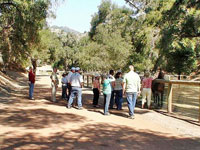 Merriewold Harmony was our next stop.Â  Harmony is a high spirited four year old that is starting her foundation training.Â Â  She loved all the attention.Â  Many people were drawn to her as well and we had to stop several timesÂ so they could go into the pasture to be even closer to her. 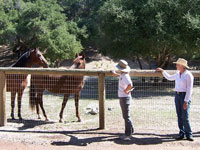 JS and Jesse James were next and were typical mischievous two year old boys: dancing and prancing and occasionally allowing a pat or scratch.

Merriewold Gaysha, Ima Honey Moon (Honey) and Ima Lucky Star (Lucky) were waiting patiently at the fence for the tour’s arrival.Â Â Gaysha and Honey are very friendly and would gladly follow anyone around…especially for a carrot!Â  Lucky on the other hand is a little shy and would rather watch most of the activity from a safe distance.Â  After a while though even he came around and made friends with one or two admirers. 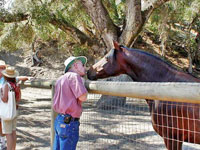 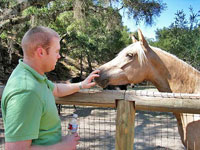 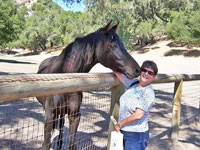 Saving the best for last, Jazzman put on quite a show, especially at his youthful 19 years.Â  He thought the crowd was rather exciting and flagged his tail and kicked up his heals.Â  We ended our tour with a look at the show barn and tack room and covered round pen (or bull pen as they say in CA) that we built just two years ago. 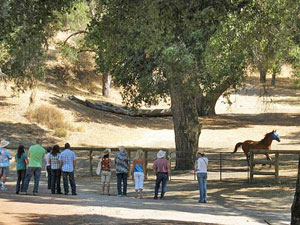 We then wandered back to the Lunch area for a bite to eat. The lunch was catered by “Mama’s Meat Ball” and despite the weird name, their food was delicious.Â  Especially the home made Italian pastries served for dessert.

During lunch (and throughout the day) we were treated to the lovely country western voice and guitar playing of Patty Torrey.Â  She was a huge hit with many people asking for her card.Â  Art Perry of Intrepid Morgans especially liked her voice and music and thought she would be an excellent addition to his yearly “Light Hands Horsemanship” weekend seminar. 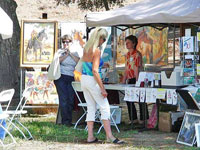 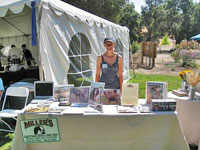 Also throughout the day Entera and Bj deCastro displayed their equestrian fine art.Â  Both artists are award winning California painters.

And this year we were joined by Miller’s Equestrian Center and Sanctuary.Â  Michelle Miller owns and manages this non-profit facility to rescue and care for horses in need, rehabilitating abused or unwanted horses.

After lunch and some socializing we all walked to the arena for the Dressage Musical Freestyle.Â  For those unfamiliar with Dressage this is a test set to music.Â  In Dressage, the horse and rider team are required to perform certain movements depending on the level of difficulty. 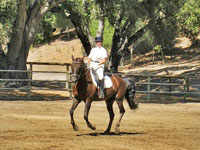 Deborah Hirons and her mare, Alamar’s Touch of Magic delighted the crowd with an upper level freestyle including many difficult movements such as: pirouettes, tempi changes and piaffe.

We received many notes later that talked about the wonderful â€˜dancing’ horse…and the amazing ability of horse and rider.Â  (You can see a video of the freestyle in the 2009 Open Barn photo album, see below)Â  Afterwards everyone wanted to meet the horse and rider, Deb and Magic were more than happy to oblige. 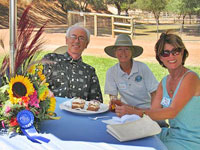 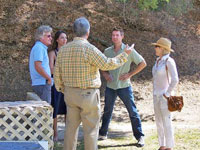 Our guests now settled in for a bite to eat, listening to music, and a last tour of the ranch and look at the Morgans. 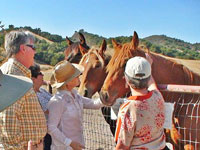 At 3 o’clock a caravan of vehicles drove to Rancho Arroyo Grande to meet the mares and foals.

Caduceus Marika’s three yearlings: Kona, Kasey and Kirin were ready for some attention.Â  They are all very tall for their age, Kasey’s just over 15 hands! 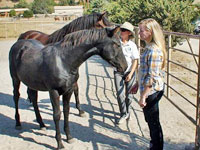 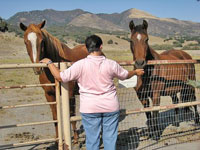 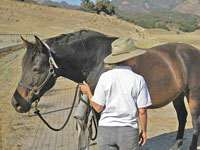 Last but by no means least we visited with the three broodmares; two Morgans, Caduceus Marika (world champion hunter) and ABL Morning Star. The third mare is a surrogate for Star and is carrying our only 2010 foal.

Â The Merriewold crew had a really great day, and we hope that all that attended had a good time, learned something about Morgans and will come back next year to help us celebrate not only our wonderful horses but also our new Huasna facility.

We are honored and pleased to announce that the popular equine magazine, The Morgan Horse, featured Merriewold Morgans in their November/December 2009 issue!Â  Click on the .pdf link below to read and/or print the article.