They also have a full academy lesson program for the instruction in all of these disciplines.

The McFalls purchased a home on acreage in Wilton, California in 2005 and are gradually developing a well thought out facility.Â Â Located in beautiful Northern California, this is the permanent home of Dragonfire. 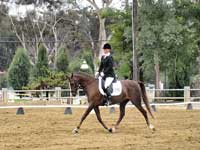 At present, the facility features a 21-stall main barn with a recreational room, vet/farrier area and tack rooms with lockers.Â  Also, an all-weather arena that encompasses a full acre and turnout paddocks.Â  Pastures for mares and foals are separated by trails that run through the creek and a galloping track around the pastures. A 10-stall mare motel houses the mares due to foal.

They have numerous lesson horses available for Adults and children alike at Dragonfire.Â Â  The instructors provide a safe and enjoyable environment for you to become the best rider that you can be.

They also offer a three day Boot Camp, includes all of the fun of camping with your horse, playing games, riding at a beautiful facility, and hanging out with the fun-loving Dragonfire group without the charge of lessons. 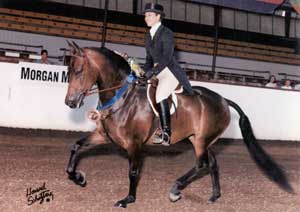 Earl and Jennifer are concerned not only with the performance of the horses they train, but also with involving their owners. They have a number of very active amateur riders, several of whom are competing in the “Masters” division (50 years of age and over). The younger set also provides an active presence.

Earl and Jennifer stress the importance of becoming a skilled and knowledgeable rider, as well as encouraging sportsmanship, responsibility and the enjoyment of horses and the people involved with them. 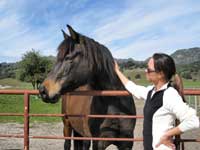 Diana and Jackie got to know Dragonfire and the McFalls when they went on a trip to look at Morgan breeding and training facilities in the Sacramento/Grass Valley area.

While touring Dragonfire they met the mare Caduceus Marika, who was trained and shown by Jennifer and had earned many Regional and National blue ribbons and a World Championship in Hunter Pleasure.

Merriewold purchased Marika and then bred her to Dragonfire Kirin to produce Merriewold Java.Â  Java, now a two year old, is a good example of the qualities that Merriewold is breeding for.

The Merriewold Dragonfire partnership has been very successful resulting in numerous wins for Galaxie and Hanah in Morgan and Open rated shows and a Grand National win for Galaxie! 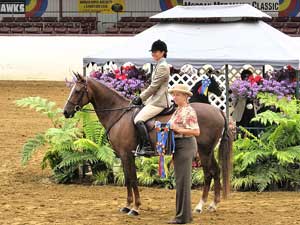 Earl and Jennifer have won numerous year end awards, including the 2006 “Lifetime Achievement for Sportsmanship” award. This national award is granted on a yearly basis to the trainer voted most deserving by their peers. The pair has also won the national Sport Horse Trainer of the Year award every year for the past four years. 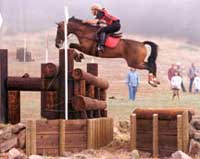 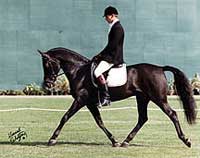 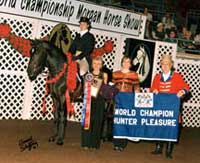 EARL McFALL, Trainer/Instructor:Â  Earl is a graduate “A” Pony Clubber, and is still actively involved in the program, teaching at several of the local pony clubs and giving clinics at the pony club summer camps.

Earl has competed successfully in Grand Prix Jumpers and through the Advanced level of 3-Day Eventing, and was long listed for the 2000 Olympics in Eventing. He is an active 3-Day competitor/instructor.

Earl was introduced to the Morgan breed by Jennifer, and has won National and World Championships in Dressage, Working Hunter, Jumpers, Hunter Pleasure and Western Pleasure.

JENNIFER McFALL, Trainer/Manager:Â Â  Jennifer also began her equestrian career in the Pony Club, and evented successfully with her 15.2 hand Morgan gelding, Dragonfire Kublakhan, one of the few registered Morgans ever to compete at the Advanced level. She continues as an active 3-Day competitor, most recently with her lovely young Holsteiner, High Times.